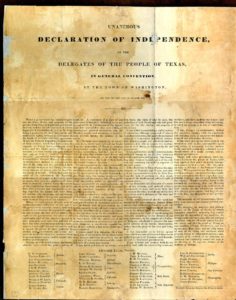 March 2, 1836 is an important day in Texas history. It marks when Texas Independence was achieved from Mexico. The 1836 Texas Revolution continued until April 21, 1836 because Mexico refused to acknowledge Texas independence.

182 years ago, the Texas Declaration of Independence was signed by 59 delegates and created our own country, the Republic of Texas, for the next 10 years. Like the US Declaration of Independence, it included the principle of trial by jury. In 1837 Houston was the capital of Texas. Texas’ citizens were known as Texians. Stephen F. Austin, the Father of Texas, served as the Republic’s Secretary of State for only 2 months before his death.

Texas is known as the Lone Star State to signify its historical struggle for independence from Mexico. We’re proud to be Texans!